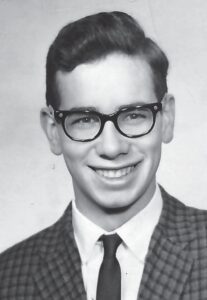 Charles M. Reyner, 78 of Harbor Springs, passed away peacefully on May 4, 2022 at the Michigan Home for Veterans in Grand Rapids, Michigan. He was born to Charles Marvin and Kathryn Kimball (VanDeusen) Reyner on January 31, 1944 in Petoskey, Michigan.

He graduated as Valedictorian from his 1962 Harbor Springs High School class. Later, he received his BA and MBA from the University of Michigan in 1968.

At that time he chose to honorably serve his country as an U.S. Army Sergeant (Quartermaster) in Frankfurt, Germany for three years. Once discharged he gained employment in international banking at various banks in Germany.

His career there lasted more than 30 years. During this time he traveled and met his former wife in Oxford, England and married her in Copenhagen, Denmark. Their time was shared in both Germany and later 2 years in Japan with their small family. He loved his family very much, especially his daughter, Sakura and his maternal grandfather in the U.S.

Charlie was kind and general by nature and had a keen sense of humor. He was fond of chess, loved to play tennis, follow his U of M sports, listen to classical music and had an insatiable desire to learn new things, such as making his favorite rice pudding or visiting a museum.

He was preceded in death by his parents and his younger brother, David Paul Reyner.

Interment will take place at the Fort Custer National Cemetery on Wednesday, May 11, 2022 at 3:00 pm.

A celebration of life service for all family and friends to attend will be held at a later date.

Arrangements entrusted to the Baxter Funeral and Cremation Service, 269-788-9800. www.baxterfuneral.com